What Running Has Taught Me

Regular readers of this blog know that I had an epiphany of sorts two and a half years ago; 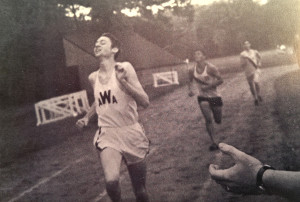 the deadly combination of high blood pressure and high cholesterol led to what doctors called “a minor stroke.” Technically, it was a Temporal Ischemic Attack (TIA): a couple of microscopic clots flicking switches deep in my brain, progressively shutting down the right side of my body. Thankfully, I got treatment in time, so there was no permanent damage. That experience caused me to take my health seriously. Most importantly, I began exercising regularly. I made it a point to walk for at least twenty minutes every day. Walking led to jogging, then running, then increasing my distance. After some backsliding, I committed wholeheartedly to my new routine in August of 2013.

The results have been measurable. First, as my fitness has improved, my resting heart rate has dropped from 72 to 46. Second, I have lost more than 35 pounds—and I was not what anyone could call overweight when I started. I now take half as much blood pressure medication as I did immediately after the stroke. The lower heart rate is a direct result of my higher level of fitness. The welcome weight loss comes from burning more calories than I consume. It’s a simple matter of math: 3,500 “extra” calories burned results in one pound of fat gone.

There have been some surprises along the way. I was a middle distance runner in high school (my best time in the mile run was 4.50.5), but I did not exercise regularly until two years ago. While getting started was a struggle, the journey has given rewards far beyond my expectations.

Getting started is hard. It gets easier—MUCH easier. Let’s be honest. It is no fun at the beginning. Gasping for breath after jogging slowly for a block is unpleasant. The brain says, “Stop this foolishness—right NOW!” The body is a co-conspirator. Your oxygen debt seems insurmountable; your lungs scream for relief. After a couple of torturous weeks, you realize that you are running a little longer before you have to walk. Then you are running for the whole 20 minutes. After a while, the time goes so quickly that you extend it to 30 minutes, then 40, and possibly more.

After the first mile, running feels amazing. You may have heard about the “runner’s high,” attributable to the body’s production of endorphins during strenuous exercise. Whether a daily run produces this chemical is in dispute, but I can tell you that most days, I feel a sense of well-being and mental clarity during most of my run. I learned that I didn’t have to run fast to get into this pleasant mental state. Most days, my pace is around 10 minutes per mile (6 MPH). Some people can walk nearly that fast. Still, the benefit is there. Definitely.

Habit is a powerful force. When I started, I knew I’d have to create a habit. Without it, my innate excuse mechanism—we all have it—would keep me on the couch. So I resolved to get out the door every morning, rain or shine, no excuses allowed, for at least 20 minutes. After two weeks, I no longer had to persuade myself. It had become a part of my daily routine. I began recording my runs (or walks) on my phone. There many apps available—most are free for the basic versions. I started with MapMyRun, then added Strava. Seeing each day’s run on the app’s calendar kept me motivated. To be honest, calling my first months’ activity “running” is a stretch. But it was a start.

Not all addictions are bad. I’ll admit it: I am addicted to this. On those rare occasions when I skip a day, I feel edgy and unsettled. A critical part of my day is missing. My body—and my mind—have come to require this. As addictions go, I am quite happy with this one.

I have learned to pay attention to what my body is telling me. Anthropologists tell us that our bodies are designed for running. After all, the early hunter-gatherers had to be fleet of foot to survive. Today, we tend to insulate ourselves from the outside world—and from our own interior space. You have only to watch the astounding number of people with ear buds firmly implanted to realize this. I’m not maligning that nice bit of technology that lets us listen to our tunes without any distraction from the outside world; I often run with my iPod cranked up. There are also times that I like to pay attention to the rhythm of my footsteps, the sound of my breathing, the rush of blood through my veins. I often find myself in a sort of meditative state when I run iPod-free. I come back from the run invigorated and renewed mentally, as well as physically.

I learn what I am capable of by failing. Running as a way of life often involves exploring our own limitations. How far can I run without stopping? How fast can I run a mile? Three miles? Twenty-six miles? The only way to learn is to make an attempt—and fail. One recent Sunday, I set out determined to extend my weekly “long” run from six miles to eight. The day was very hot. Even though I was carrying water, when I reached four miles, I simply could not run another step. I had allowed myself to become dehydrated because of the heat. I was drinking regularly, but it was not enough. Now I know, and can avoid the problem in the future. It was an important lesson.

Can we derive life lessons from a running lifestyle? Certainly. Success in work and life often demands that we push ourselves past where we thought our limits were, and sometimes we fall short of the mark. Those of us who sell for a living often have times where we don’t feel like making one more call in search of a new client or customer. Making that call when we don’t particularly want to is no different from pushing ourselves to run the last half mile when we are tired and sore.

Becoming a runner involved setting goals. It still does. At the beginning, it was modest: get out the door every morning for at least 20 minutes. I knew that the only thing standing in the way of that goal was my own lack of resolve. I knew the goal was attainable and completely within my grasp, subject only to my own determination. Today, my running goals are more ambitious: increasing my weekly distance to 30 miles from 20; shaving two minutes from my one-mile pace; running a marathon.

Running has taught me that I am capable of more than I first thought—not only in the physical sense of running longer distances at a faster pace, but also in the mental toughness and discipline that leads to success in business and in life. It has taught me that I can silence the yawping inner voice that insists, “You CAN’T do this!”