What in the world is going on with rates? 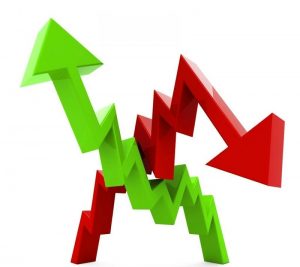 This is a good—and frequently asked—question.

To understand what’s going on now, you have to know at least the fundamentals of how the mortgage industry operates.

When a lender underwrites, approves and funds a loan application, they do so with the intent of selling that loan on the secondary mortgage market. Fannie Mae and Freddie Mac are two of the best-known participants, although there are many more.

The lender sells the newly-funded loan at a profit—over the face amount of the loan. This is where they make their money, not with any interest they collect from the borrower.

Fannie and Freddie and other secondary market players pool their loans into a type of bond called a mortgage-backed security (MBS). These bonds, which investors perceive as having extremely low risk, move up and down in price in response to the way investors buy and sell them.

When the bonds are in high demand, their price goes up. Rates always move in the opposite direction: higher bond prices mean lower mortgage rates, and lower prices mean higher rates.

The MBS market normally fluctuates about 10–15 points per day, although 25-point intraday moves are not unusual. Here is a daily chart of recent MBS activity (December 20-Jan. 19). The longest bars represent a range of about 25 points. 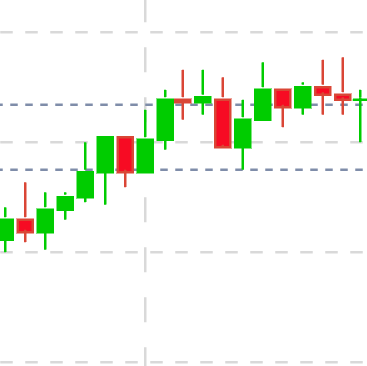 In “normal” times, a change in MBS prices results in a proportionate change in the cost of mortgages to consumers. These changes appear more-or-less immediately. Some lenders issue mid-day price changes in the case of larger moves in MBS prices. Others may wait until the next day to publish the changes.

That’s what happens in “normal” times. Here is what has happened recently.

On February 24, 2020, investors began selling stocks in response to fears of the economic effects of the COVID-19 virus. The Dow lost 3,000 points in one week. The money flowed into bonds—including MBS, increasing their price. This movement in bonds is called “flight to quality,” as investors seek to minimize their risk in turbulent times. As MBS prices increased, mortgage rates dropped. Lenders experienced a sudden influx of business and were overwhelmed. More about this momentarily.

On March 3, Fed Chair Jerome Powell announced an “emergency” cut in the Federal Funds rate of .50%. This announcement came as a surprise, as the market had widely expected the Fed to lower the rate at the March 18 meeting. Although Powell intended the sudden large rate cut to stimulate the economy, investors were surprised and taken aback, and the Dow plunged 526 points on the news.

There have been ongoing concerns about the U.S. response to the crisis as the virus was declared a pandemic, and stocks continued to fall while exhibiting spectacular volatility. There were several times where automatic “circuit breakers” halted trading during the day. At this writing (3/13/2020), the Dow has lost more than 5,200 points, often fluctuating 2,000 points in either direction. 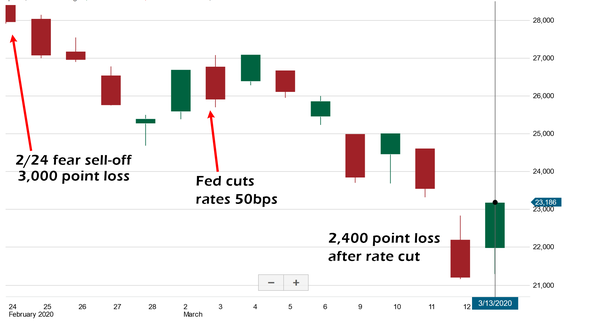 The volatility in stocks has appeared in the MBS market as well—and this has been a rare occasion where sell-offs in equities has not consistently resulted in purchases of bonds. Here is the MBS chart for the same period as the Dow, above: 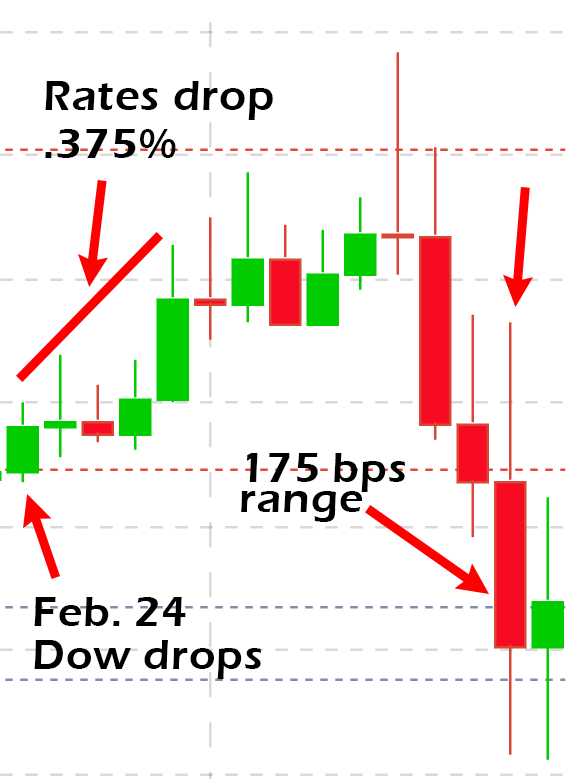 Thank you, patient reader, for sticking with this lengthy explanation. The real answer is near. For anyone who might have dozed off or forgotten the original question, it was why rates have not dropped after the Federal Funds cut.

The first part of the answer is that the Federal Funds rate has nothing to do with mortgages. It is the rate banks charge each other to loan other banks money overnight. Mortgage rates are a function of mortgage-backed securities.

Except when they’re not.

When rates drop suddenly, many people submit refinance applications to lower their rates and save money. Lenders have a finite capacity for the number of loans they can handle, and they quickly get overwhelmed. The volume of new loans is about 2.5 times what it normally would be at this time of year.

Lenders manage their workload by “throttling.” This means that they purposely increase their rates to discourage borrowers (and brokers) from submitting new loans. While purposely turning away business may seem like a poor business strategy, it makes sense; lenders would prefer to keep their service levels high to avoid losing relationships with the borrowers, brokers and correspondents who are the source of their business.

The perceptive reader may notice that there have been four days of red bars on the MBS chart (lower prices, higher rates) at the end of the week even as stock prices have also been under pressure. The simplest explanation for this unusual phenomenon is that with the extreme volatility in both stocks and bonds, together with continuing uncertainty surrounding the effects of the novel coronavirus (and the U.S. response to it) that they have elected to “sit out” this period and wait to see a predictable direction in the market. Rather than parking their money in bonds, investors’ flight to quality over this past tumultuous week has been to move into cash—the ultimate safe-haven investment.

Mortgage rates, which bottomed out around 3.25% for a 30-year fixed-rate conventional loan, have gone back to 4% this week. Will they rebound? Probably—but it remains to be seen whether we will see them drop as far as they did earlier in the month.

The best advice I can offer today—and what I tell my clients who were hoping to see lower rates—is this: If you are buying a home, lock your rate as early as possible. Playing “bond market roulette” is always a risky (and often expensive) proposition. You can always refinance later if rates drop again.

To people who had been on the fence about refinancing but took too long to decide: don’t ask lenders to call you if and when rates drop. We won’t. When rates drop as they did earlier in the month, we are too busy answering our phones and originating loans to call people who couldn’t decide earlier. Start an application now, with a clear goal of what your target rate is. When you are a client, with an application already in the lender’s system, you’ll get a call if and when rates improve. If you are a prospective borrower who is only mildly interested, loan officers will be too busy to reach out to you. This may seem callous, but it is the way things are.

I hope this somewhat lengthy explanation is helpful.

If you’d like to start an application, go to our secure online application. You can also call or text us directly at 925-383-2846