The Mortgage Lie You Probably Believe 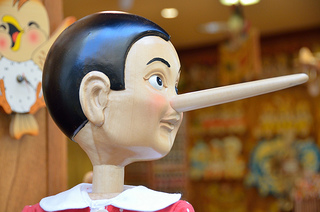 We are the victims of a lie. Every day, talking heads and other media purveyors of opinion reinforce it. They should know better, yet they persist in trying to mislead us all.

“Mortgage rates are good today, but nobody can qualify anymore.”

“The banks are only lending money to people with perfect credit.”

“If you want to buy a house, you’d better save up at least a 20% down payment so you can have some ‘skin in the game.’”

Each of these three statements is utterly false—but millions of people believe them, because they hear the them over and over on TV, radio and in the press.

It’s time to put a stop to this lie, because it is harming the millions of people who believe it—and act on it.

A client of mine, a Marine Corps veteran, brought this home to me recently. He had been through a foreclosure several years previously, but that event was far enough in the past that he would qualify for a new mortgage.

“My credit score took a big hit with the foreclosure,” he told me, “but we’ve gotten it up around 740 now.” I ran his credit. There were some older, incorrect entries showing, and his score was 698—still acceptable to any lender.

His face fell when I gave him the news. He got up to leave. “I’m sorry I wasted your time,” he said sadly. “I thought it was a lot better.”

“Hang on,” I said. “You’re completely qualified for the loan you want.” He shook his head. He seemed not to hear me.

“I really thought my score was better than that. I guess we’ll just have to wait.” It took me twenty minutes to convince him that he would be able to qualify for a new mortgage—even with a non-perfect credit score. We have issued his preapproval letter and he and his wife have been making offers. He will be a homeowner soon.

This mortgage lie is so pervasive that would-be homeowners have come to believe it. Because they are convinced their application will be rejected—an unappealing prospect—they don’t even make the attempt.

It’s true that getting a mortgage is more difficult today than it has been in the past. Borrowers must document their income and assets thoroughly. Large deposits have to be explained and paper-trailed. There are more disclosures and regulatory delays in the process today than ever before. But I’ll say this as plainly as I can: if you have a credit score of 620 or higher, a down payment of at least 3% (even less in some cases) and an ability to document your income and assets, you can become a homeowner.

Since home ownership is still integral to The American Dream, doesn’t it make sense to see for yourself whether what I say is true for you?

photo credit: I’m not a liar! via photopin (license)