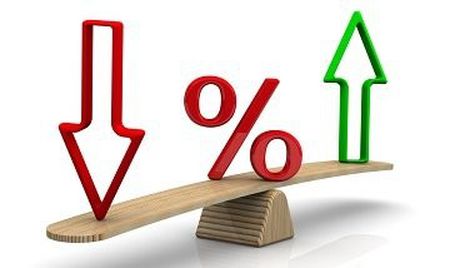 This is a recurring question I’ve answered multiple times, but I think it is important enough to take one more swing at it.

The first thing to know is that “the banks” are not the ones to set mortgage rates. Nor is the Federal Reserve—their recent rate cut, dropping the Federal Funds rate to near zero, has not caused mortgage rates to go down, nor will it have that effect.

Most mortgages today are sold to investors on the secondary mortgage market. Fannie Mae and Freddie Mac are the best-known players, but there are others. Fannie and Freddie pool these loans into bonds called mortgage-backed securities (MBS). These securities are traded on the market like other bonds. Their price fluctuates according to the market activity.

Bonds tend to be contrarian: when stocks sell off, bonds normally go up. This is because investors who want to get out of stocks will put the money into the comparative of bonds. This is called flight to quality.

We saw this happen during the week of February 24, 2020. Stocks began selling off sharply in response to fears of the economic effects of the coronavirus. The fear-driven sell-off was exacerbated by the sudden “emergency” rate cut announced by Fed Chair Jerome Powell on 2/28. The 50 bps cut caused stocks to continue their decline, with money flowing into MBS. Rates dropped about .375% during the week. Refinance applications spiked, with lenders getting in some cases three times their normal volume in new applications.

Here’s what MBS looked like during the week of 2/24. The green bars represent higher MBS prices and lower rates: 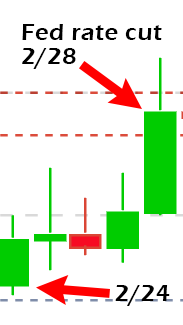 With the increased volume flowing into lenders, they engaged in the practice of throttling. This means that they purposely raise their rates to inhibit the flow of new applications until they can regain control of their workflow. Lenders prefer to turn business away rather than allow their service levels to decline to a point where they lose future business. In some cases, lenders increased their rates by a full percentage point or more.

As the implications of the pandemic—and the government’s ability to deal with it effectively—became evident, the stock market’s volatility increased, with intraday swings approaching 3,000 points: 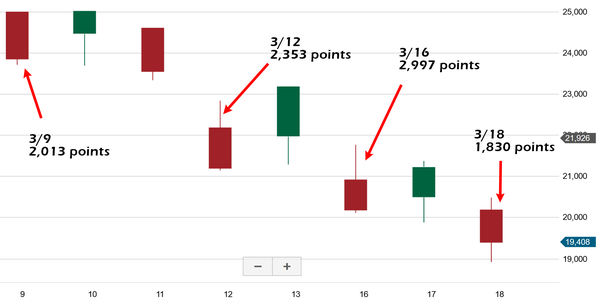 All this selling would normally result in a strong rally in MBS and correspondingly lower rates. Instead, MBS are doing this:

The extreme volatility is causing investors to sit out the crisis with cash, so both stocks and bonds are under pressure. With these extreme swings in MBS prices, lenders in many cases are having to re-price multiple times each day as they try to stay on top of the markets.

The best advice I can offer in these turbulent times is this: if the rate you have now is 4% or higher, you will benefit if rates find their earlier low levels. There is no way to know for certain whether this will happen or when, but you should get in touch with your preferred lender and get an application into their system. This way, you’ll be in a position to act quickly if and when rates drop again. Expecting loan officers to call you if rates drop is not realistic; everyone will be too busy to call people who were on the fence before.

And wash your hands. 20 seconds, minimum.