Getting Real (Chronicles of Running) 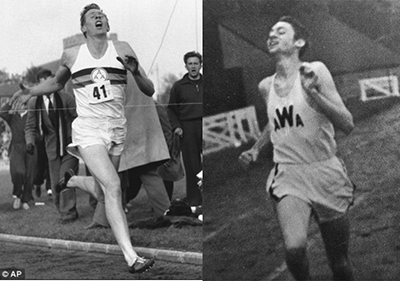 Roger and Me. That’s Roger Bannister on the left, crossing the line in under 4 minutes for the mile. That’s me on the right, 55 seconds slower–and 9 years after his historic run.

Years ago, as I was embarking on a selling career, I learned that success involved setting goals—audacious ones. Even possibly unattainable ones. A “goal” that was like an Easy A class wouldn’t count; there has to be the real possibility of failure.

I learned that this goal (sometimes called a BFHAG, for Big Fat Hairy Audacious Goal) had to be specific. It also had to be written down and consulted regularly.

One more thing: you had to make it public. You couldn’t just put your goal on a post-it and stick it under your blotter. You had to open yourself not only to the possibility of failure but of public failure. Where the mind (and legs) feel like quitting, the ego may carry us through.

People who know me are aware of my rekindled passion for running. I have mentioned to some friends that I have been considering the commemoration of my 70th birthday next year (gulp) by running a marathon. That’s a little jaunt of 26 miles, 385 yards, kids. If I hit my goal time, that means putting one foot ahead of another without stopping for 4 hours, 25 minutes.

The goal has been somewhat nebulous up to now; my birthday is March 20th, and there are plenty of races in 2015. Maybe next October? November? That’s a LONG way away.

Except: Modesto. March 29, 2015. The date is right. There are no hills. The weather will be perfect. I have time to train—7 months.

There are no excuses—so Modesto it is. Now all my thousands hundreds several fans and followers know it, too.

Oh, and I almost forgot to mention: it’s a sanctioned Boston Qualifier race. That means if I hit my goal time (4:25), I’d be eligible to enter the most revered race of all: Boston.